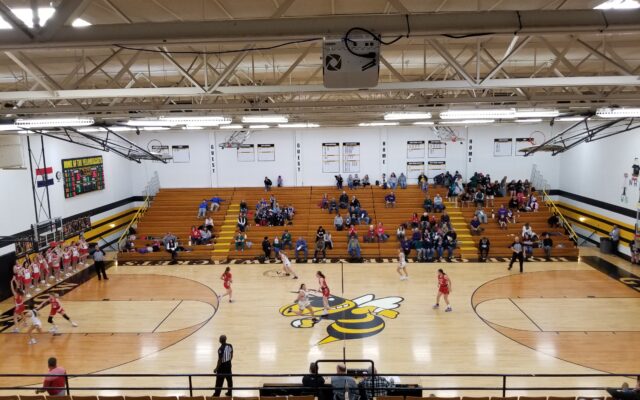 Both top seeds advanced to the Glasgow Tournament finals with wins Wednesday night.

The Westran Hornets beat the New Franklin Bulldogs 63-59 in a back-and-forth overtime thriller. New Franklin led 19-9 after one quarter. Westran started the second quarter on a 13-4 run to bring it within one, but the Bulldogs scored the final four points to go to the break up 27-22. New Franklin still led after a third quarter that featured three ties and four lead changes. That lead held until late in the fourth.

Austin Ward with the call on KRES and centralmoinfo.com. The Bulldogs recaptured the lead with an Owen Armentrout layup but a Langden Kitchen right block shot with two seconds left forced overtime tied at 54. The Hornets controlled the overtime period.

Kitchen iced the game in the final seconds with a free throw and finished with a game-high 32 points.

New Franklin was led by Tanner Bishop with 15 points. Armentrout had 14 and Connor Wilmsmeyer contributed 12.

The Cairo girls cruised to a 57-26 win over Fayette. After Cairo got out to a 15-2 start, Fayette scored 11 unanswered before the Ladycats took momentum for good.

Avery Brumley scored 15. Macie Harman led with 17. The Lady Falcons got 8 points from Kay Sullivan. Our coverage from the Glasgow Tournament continues Thursday with the other semifinals of Cairo-Fayette boys and New Franklin-Marceline girls. Brandon Monty will have the call on 99.9 The Captain.