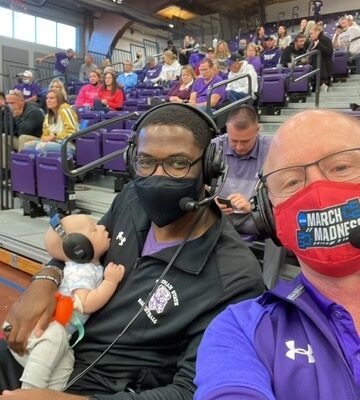 The Truman State basketball teams swept Maryville this afternoon (Sat) at Pershing Arena. In the women’s game, Ellie Weltha hit a pair of free throws to give the Bulldogs a 70-67 lead with 11 seconds left. This is how the game ended….

Brad Boyer with the call on Superstation KRES and centralmoinfo.com. All five Bulldog starters finished in double figures, led by Hannah Belanger with 17. Coach Theo Dean liked his team’s aggressiveness in the second half….

The Truman women even their conference mark at 1-1 and improve to 4-5. They are off until a December 19th game at home with Hannibal-LaGrange.

Elijah Hazekamp paced the Truman scoring with 17. The Bulldogs improve to 2-0 in the GLVC and 6-2 overall. Maryville’s six-game winning streak ended. The Saints drop to 7-2. The Truman men will host CCCB next Saturday night. That game will be broadcast on KIRK.