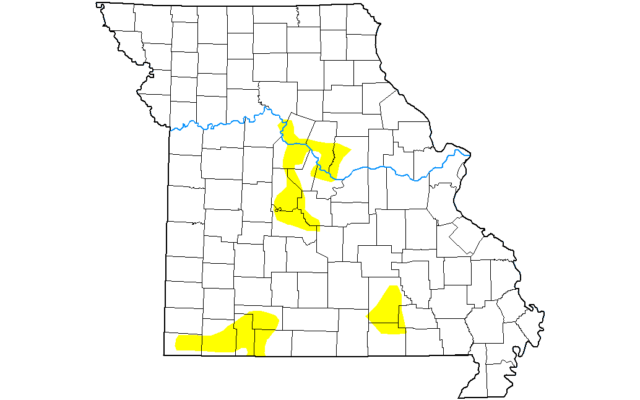 Drought conditions in Missouri as of August 31st, 2021. (The U.S. Drought Monitor is jointly produced by the National Drought Mitigation Center at the University of Nebraska-Lincoln, the United States Department of Agriculture, and the National Oceanic and Atmospheric Administration. Map courtesy of NDMC.)

The most recent USDA Drought Monitor indicates three areas of abnormally dry conditions around the state.  As of last Tuesday, most of southern Boone County, along with western Callaway, northern Camden, northern Cole, eastern Cooper, southern and western Howard, western Miller, western Moniteau, and most of Morgan counties comprise the most elongated of the three pre-drought patches.  Southern Shannon County anchors a second patch, joined by northern Oregon and western Carter counties.  Nearly all of Stone County, along with a majority of Christian and McDonald, southern Barry, and western Taney counties, are in the third patch.  Altogether, 6.74 percent of Missouri are in abnormally dry conditions.  As has been the case since late June, no part of the state is in moderate or worse drought condition.