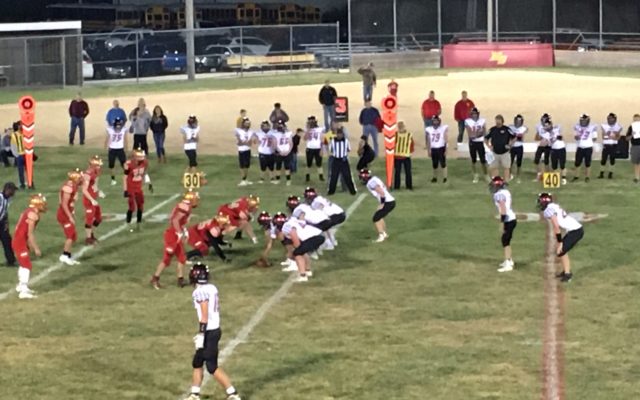 North Shelby quarterback Cale Stoneburner rushed for five touchdowns to lead the Raiders to a 52-14 victory over Knox County Friday. The game was scoreless through the first 17 minutes, then the Raiders senior quarterback took matters into his own hands.

Brandon Monty with the call on Glory 97 and centralmoinfo.com. North Shelby took a 14-0 lead into the half and ran away with the game early in the second half. Stoneburner wasted no time getting the scoring started in the third…

From there, North Shelby dominated the ground game. The Raiders scored 22 points in the third off two rushing touchdowns from Stoneburner and a score from senior running back Justin Lunsford. Stoneburner finished with 177 yards on 15 carries and Lunsford added 169 yards on 14 attempts.

North Shelby improves to 5-0 with the win and snaps a 10-game losing streak against Knox County. Raiders head coach David Stuckey acknowledges it was an important district win.

Knox County falls to 3-2 with the loss. Eagles head coach Bruce Vannoy says there were positives to take from the loss.