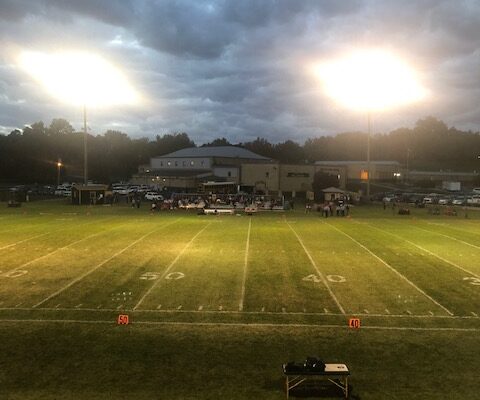 The Harrisburg Bulldogs survived a late scare from Fayette to defeat the Falcons 30-24 and win their first-ever Lewis & Clark Conference football title. Harrisburg held a 14-12 at the half, but that lead disappeared with the second half kickoff.

Steven Findley Jr. with the call on Superstation KRES and centralmoinfo.com of Chase Allen-Jackman’s 70-yard kickoff return to make it 18-14 Fayette. The two teams each added a touchdown later in the quarter as Fayette held a 24-22 lead into the final quarter. That’s when Harrisburg’s Trace Combs hooked-up with Hunter Cole for the third time on the night.

Fayette had one final chance when Ben Wells connected with a 45-yard pass to Chase Allen-Jackman down to the Harrisburg 15-yard line. However time ran out before Fayette could snap the ball again. Fayette coach Mike Thompson analyzed his team’s ill-fated final plays.

Harrisburg went 3-4 on two-point conversions while Fayette was 0-3. Thompson said execution was lacking on both sides of the ball when it came to that aspect of the game.

Harrisburg improved to 6-2 and 5-0 in the Lewis & Clark Conference. Their win coupled with having the head-to-head tiebreaker against Marceline gave the Bulldogs their first-ever conference title. Hopkins put the conference title in perspective.

Harrisburg will conclude the regular season next week against Scotland County while Fayette travels to Father Tolton.