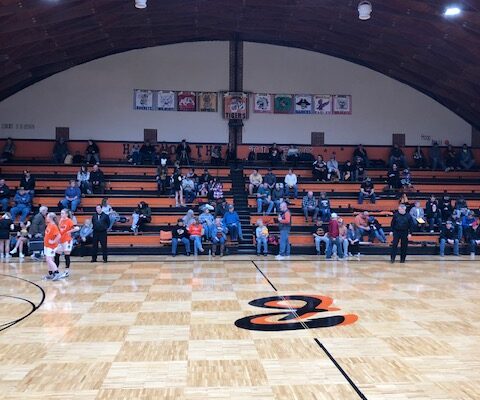 The Green City basketball teams used different methods to defeat Brashear Tuesday night in a Tri-County North Conference doubleheader at Brashear High School. The Lady Gophers caught fire in the fourth quarter to rally for a 48-41 win over Brashear. The Lady Tigers led by as many as seven points and held a 28-24 lead to start the fourth quarter. That’s when Jaryn Hatcher took the game over for Green City.

Colin Schowe with the calls on Superstation KRES and centralmoinfo.com. Hatcher finished the game with 32 points, with 19 of those coming in the final quarter. The Lady Gophers outscored Brashear 24-13 in the final quarter to rally for the win. Green City girls’ coach Mike Schmidli said the fourth quarter showed Hatchers’ capabilities.

The win snaps a seven-game losing streak for Green City as they improve to 5-12. Brashear was led by Lacey Fisher with 15 points. However, Fisher sat a significant period of the fourth quarter due to picking up her fourth foul. Brashear girls’ coach Emily Powell said Fisher’s absence was significant.

Brashear drops to 6-12 with the defeat. While the Green City girls finished strong, the Green City boys went on a scoring tear in the first quarter to cruise to an 80-46 win over the Tigers. Xander Salas set the tone with his three-point shooting.

Salas finished with a game-high 23 points, including five three-pointers. He entered the game with only seven triples on the season. The Gophers outscored the Tigers 30-9 in the opening quarter to take firm control. Green City boys’ coach Matt Ayers said Salas is starting to find his scoring touch.

Brashear drops to 8-10 with the defeat. Both schools are on the road for doubleheaders Friday with Green City visiting Putnam County and Brashear traveling to Scotland County. You can hear full postgame interviews with the coaches online at centralmoinfo.com