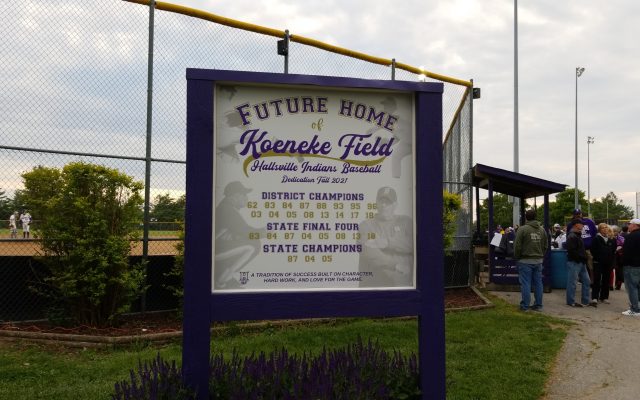 The Hallsville Indians knocked off the Sturgeon Bulldogs 4-3 Tuesday night. Following the game, Hallsville made a special announcement regarding head coach Barry Koeneke…

Koeneke reacted to the news postgame.

Sturgeon coach Kevin Hicks is a friend of Koeneke and is also retiring at the end of the season following 28 years of coaching and 22 years at Sturgeon.

In the game, some costly Sturgeon errors led to all but one of Hallsville’s runs. Blake Bailey gave Sturgeon a 1-0 lead with an RBI double in the first inning and Hallsville tied it in the bottom half after scoring on a wild pitch. Hallsville took the lead in the fifth on an AJ Austene sac fly following a leadoff triple for Ben Boyle. The Indians tagged on another run after Sturgeon’s left fielder made an error. The Bulldogs responded in the sixth, with Taven Kalinowski providing the highlight hit.

Austin Ward with the call on Glory 97. Sturgeon’s second baseman made a throwing error in the bottom of the sixth on what would’ve been the final out of the inning and Tyger Cobb scored the deciding run on the play. Hicks says the defensive struggles have been constant all season.

Andrew Orschlen started for Hallsville and struggled with command but struck out 11 batters over four innings while surrendering one run, two hits and four walks. Koeneke was mostly pleased with the effort.

Hallsville finishes the regular season 13-7 and faces Boonville in the Class 4 District 7 semis. Sturgeon ends 10-7 and is the top seed in its district. The Bulldogs will get the winner of the Wellsville-Middletown and Bevier game in the Class 1 District 12 semis.