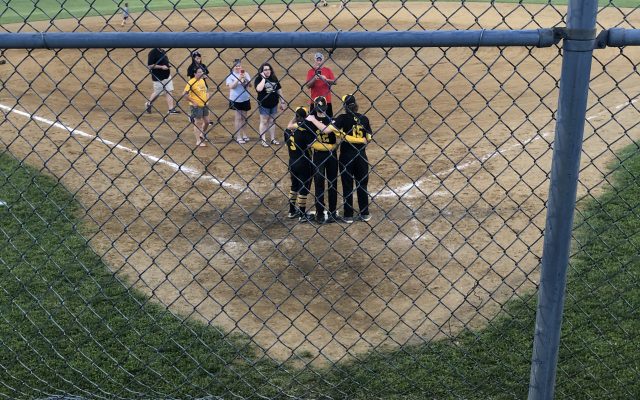 The Green City Gophers scored nine runs in the second inning on their way to a 12-5 win over Pattonsburg Wednesday night in a Class 1 Quarterfinal. The win sends Green City to the Class 1 Final Four for the second time in program history. Trailing 1-0 in the bottom of the second inning, the Gophers sent 13 men to the plate in the inning. Landon Doosing’s second hit of the inning would provide the final exclamation point for the frame.

Colin Schowe with the call of Doosing’s two-run double on Superstation KRES and centralmoinfo.com Doosing helped lead a balanced attack by going 3-3 at the plate and finishing a home run short of the cycle. Eli Tipton also had a productive game at the plate for Green City going 3-4 with three singles and two RBIs. Tipton also relieved starting pitcher Laydon Fields over the final two-and-a-third innings for the Gophers to help secure the win. Green City coach Dale Whitacre said Tipton has developed into a solid player over the course of his career.

The Gophers chased Pattonsburg starter Kaden Dejong from the game after an inning-and-a-third of work. He was tagged for seven runs on four hits and six walks over that time period. Whitacre said he knew they needed to get off to a fast start against Pattonsburg.

Pattonsburg outhit Green City for the game 13-12. However, the Panthers stranded 13 runners on base. Pattonsburg finishes the year 13-3 after capturing their first district title in just their fourth season in program history. Pattonsburg coach Jeffrey Epperly reflected on what his four seniors meant to the program.

With the win, Green City improves to 12-3 and returns to the Class 1 Final Four for the first time since 2018. Awaiting them will be a familiar opponent in the Oran Eagles, who defeated the Gophers in the semifinals that year 7-1. This year’s semifinal between Green City and Oran is scheduled for an 11 am first pitch on Monday.