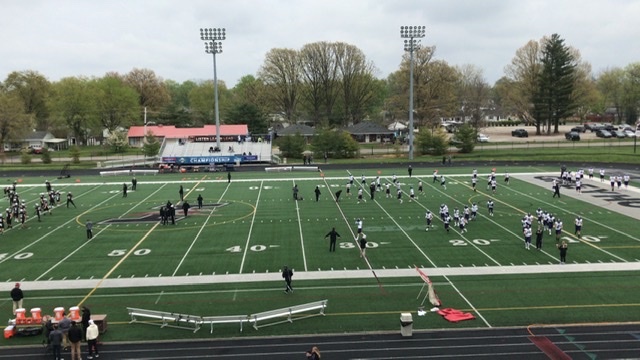 Toriano Clinton scored four touchdowns and rushed for 235 yards to lead Indianapolis to a 46-29 victory over Truman State last night (Sat.) in the Hoosier State to claim the Great Lakes Valley Conference championship. His final touchdown run, with 1:48, snuffed out a late Bulldog rally. Earlier in the fourth quarter, Nolan Hair engineered a 13-play, 82-yard drive to pull the Bulldogs within one possession.

Brad Boyer with the call on Superstation KRES and centralmoinfo.com. Hall then converted the two-point conversion. The Columbia Rock Bridge graduate also had a touchdown grab in the second quarter that gave Truman a lead.

Hall finished with seven catches. Hair threw three first-half touchdown passes to give the ‘Dogs that 21-14 lead. UIndy scored the final 10 points of the first half, including an 83-yard drive in just 1:16 to lead 24-21 at intermission. The Greyhounds made it 23 unanswered points and a 37-21 lead.

Jake Ellis had 11 receptions for 138 yards and a touchdown. Dante Ruffin had nine catches for 111 yards and a score. Nesbitt saw a benefit to getting in a spring season.