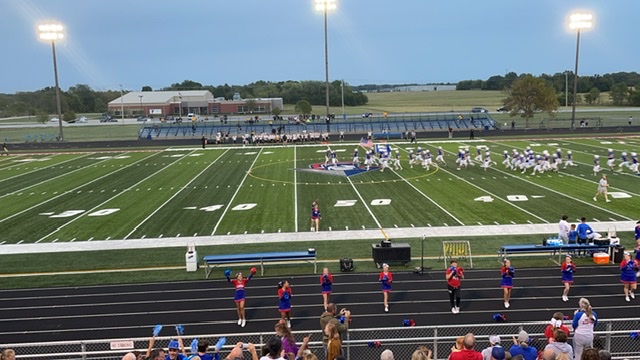 The Moberly Spartans scored 25 unanswered points in the first half and beat Fulton 32-22 for their first victory of the season on homecoming night. The Hornets marched down the field on their opening drive and scored first on a 28-yard touchdown pass from Dustin Hagens to Walker Gohring. The Spartans took advantage of a series of Fulton mistakes to go on their run. The Hornets messed up a punt snap, turned the ball over on a fumble, an interception, and on downs to set Moberly up in prime field position. The Spartans got a pair of touchdown runs each from Derieus Wallace and Gage St. Clair to make the score 25-6. Coach Cody McDowell…

It looked like Moberly would take all the momentum into the locker room until the Hornets hit on this trick play….

Brad Boyer with the call on KWIX and centralmoinfo.com. The two-point conversion made it 25-14 at the half. The Spartans mishandled the opening kickoff of the second half and Fulton quickly drove to the one yard line. McDowell’s Spartans turned away the Hornets on three straight plays….

The Spartans executed a 13-play, 76-yard drive to get some breathing room….

Fulton remains winless at 0-4. The Spartans improve to 1-4 and 1-1 in the NCMC. Moberly will visit Marshall next Friday in a game that can be heard on KWIX. You can hear the full postgame interview with Cody McDowell with this story at centralmoinfo.com.