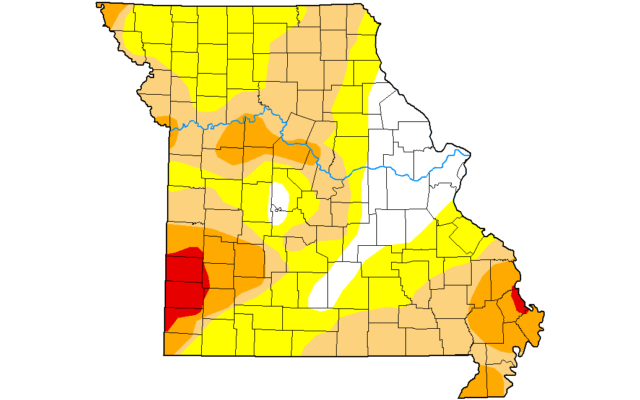 Drought conditions in Missouri as of November 15th, 2022. (The U.S. Drought Monitor is jointly produced by the National Drought Mitigation Center at the University of Nebraska-Lincoln, the United States Department of Agriculture, and the National Oceanic and Atmospheric Administration. Map courtesy of NDMC.)

Snowfall across Northern Missouri, including parts of the Kansas City metro, resulted in notable upgrades on this week’s US Drought Monitor.  The latest map shows an end to severe drought conditions that had stretched from Marshall north through Salisbury, Moberly, Marceline and Macon to Kirksville.  They now join neighboring areas in moderate drought.  It’s a similar story for western Lafayette and most of Jackson counties, where severe drought conditions are now contained within the Interstate 435 loop.  Cass County, along with parts of neighboring Johnson and Henry counties, exited drought conditions and are now classed as abnormally dry.

Percentage-wise, areas of Missouri considered to have normal moisture are unchanged at 13.4 percent.  Extreme drought conditions actually expanded compared to last week, now at 2.8 percent, as a handful of parcels in Scott County fell from severe conditions.  Severe drought now accounts for 13.6 percent of the state, down six points on the week, while moderate drought covers almost a third of Missouri.