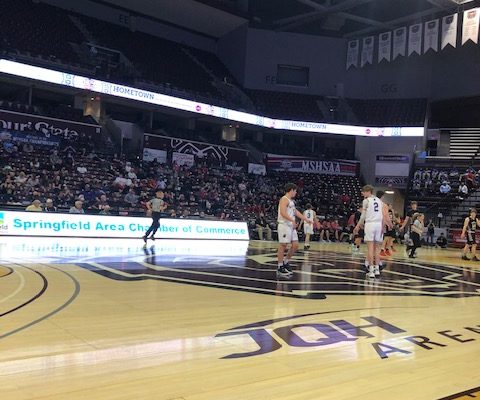 The Salisbury boys advanced to the Class 2 state championship with a 64-42 victory versus North Andrew Thursday in Springfield. North Andrew trimmed its deficit to 22-20 with two and a half minutes left in the first half, but Salisbury closed the quarter on an 8-0 run.

Eric Duick with the call of senior Jackson King’s 3-pointers on 99.9 The Captain and centralmoinfo.com. King proceeded to provide a game-high 25 points on 11-14 field goals. The Cardinals scored the semifinal’s first points, but the Panthers countered with an 11-0 run. Aside from the aforementioned 22-20 deficit, North Andrew never threatened. Salisbury head coach Kenny Wyatt analyzed the hot start.

Salisbury seeks a 19th consecutive win and its second-ever state title. Pregame coverage of Salisbury and Campbell begins at 1:45pm on KIRK and centralmoinfo.com with Eric Duick and Colin Schowe on the call.