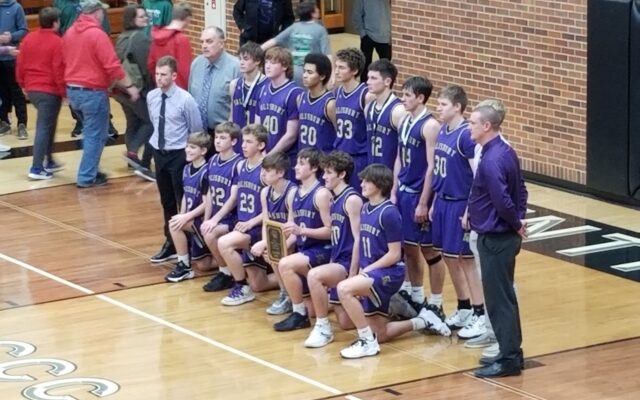 Salisbury used a pair of big runs in each half to pull away from Harrisburg 51-46. Harrisburg scored the first 11 points of the contest before Salisbury responded with a 16-2 run. The Panthers lead was short lived and Harrisburg went to halftime holding a 25-20 edge. After trimming the deficit to one numerous times, Salisbury put together a 10-0 run in the third quarter to take the lead back. The Bulldogs tied the game at 41 in the fourth but never regained the lead.

Austin Ward with the calls on KRES and centralmoinfo.com. Ethan Hamilton led Salisbury with 15 points, Gavin Cobb scored 12 and Jayden Green had 10. Coach Kenny Wyatt was most impressed with the defensive effort.

Tanner Lanes led all scorers with 17. Jace Carr had 13.

In the third place game, Macon outlasted host Centralia 69-58. Both teams came out firing offensively, with Centralia leading 24-16 at the end of the first. Centralia led for all but a few seconds of the first half, but Macon slowly chipped away throughout the second quarter and outscored the Panthers 19-11 in the second frame. Tigers forward Boston Douglas dominated the first half with 21 points and finished the game with a game-leading 29 points. Macon coach Dale Devenport was happy with his team’s resiliency following a semifinal loss in which they led for all but the final second.

Centralia head coach Scott Humphrey was pleased with the team’s 24 point first quarter, but says his team must be consistent on offense for 32 minutes…

Beau Gordon and Grant Erisman each led the Panthers in scoring with 16.

In the consolation final, Boonville defeated Hallsville 54-38 to improve to 3-3 on the year. The Pirates offense started to click late in the first quarter and carried into the second, where they outscored Hallsville 18-4. Boonville head coach Mark Anderson says his team rediscovered its groove shooting the ball in this game.

Junior forward Jackson Johns led the way with 17 points while guards Luke Green and DaWan Lomax each scored in double figures with 14 and 11, respectively. Hallsville struggled shooting-wise in the first half but put up 17 points in the third quarter off a string of three pointers. With reigning all-district selection AJ Austene still out due to injury, Hallsville head coach Brandon Crites says he’s pleased with how his younger players have progressed on offense early in the year.

Kolton Garner led Hallsville with 13. The Indians fall to 3-4 on the season with the loss.