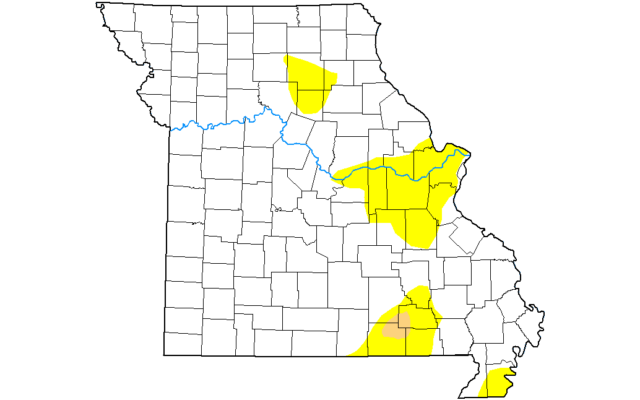 Drought conditions in Missouri as of November 16th, 2021. (The U.S. Drought Monitor is jointly produced by the National Drought Mitigation Center at the University of Nebraska-Lincoln, the United States Department of Agriculture, and the National Oceanic and Atmospheric Administration. Map courtesy of NDMC.)

Portions of five more Missouri counties are now considered abnormally dry in this week’s USDA Drought Monitor.  As of Tuesday, nearly all of Pemiscot County in the Bootheel, along with southeastern Dunklin, have entered pre-drought status.  Also entering this stage were most of Washington, northern Crawford, southwestern Jefferson, and the northern edge of Phelps County.  The dry patch over Nodaway and Andrew counties in northwest Missouri has disappeared, while drought remains in the corners of four south central Missouri counties.  Abnormally dry conditions in a majority of Macon and Randolph counties are unchanged from a week ago.  13.3 percent of Missouri is in some stage of dryness, up another 2.7 percentage points from a week ago.