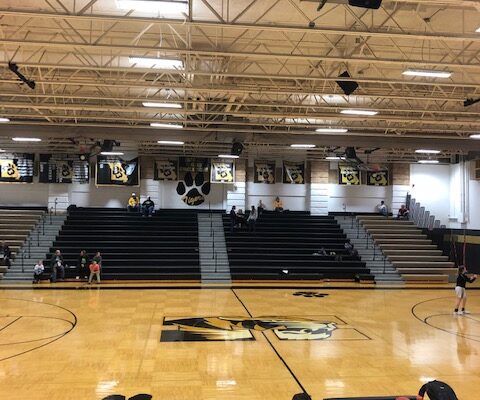 In the boys’ game Marceline was victorious 46-33. A back-and-forth first half saw Marceline take a slim 19-16 advantage into halftime. In the third quarter, Wyatt Molloy took over for the Tigers.

Colin Schowe with the calls on Superstation KRES and centralmoinfo.com. Molloy accounted for all 13 of Marceline’s third quarter points and finished with a game-high 22. Marceline boys coach Mike Severa says Molloy is one of several players stepping up at the right time this season.

Will Heller added 13 points as Marceline improved to 2-1 on the season. Meanwhile, Paris drops to 0-5. Despite trailing by twelve heading into the fourth quarter the Coyotes battled until the end cutting the deficit in half at one point. Paris boys coach Jeremy Skinner said he liked the way his young team battled against an experienced Marceline squad.

In the girls’ game, Marceline used a fast start to breeze to a 51-29 victory over Paris. The Lady Tigers hit five of their six three-pointers in the first quarter to race out to a 24-9 lead at the end of the opening frame. From there, Ramzee Bruner took over in the paint as she finished with a game-high 16 points. Marceline girls coach Jordan Beck analyzed her leading scorer’s performance.

Marceline has now won four straight games to improve to 4-1 on the season. Like the Paris boys, the girls now sit at 0-5 on the season. Aside from the early outside shooting from Marceline, Paris girls coach Garrett Thomas said he liked the way his team played defense against the Lady Tigers.

Maura Crusha led the Lady Coyotes with twelve points. Both Paris teams will seek their first wins Friday night when they host Schuyler County. Marceline is next in action Friday for a doubleheader at La Plata.