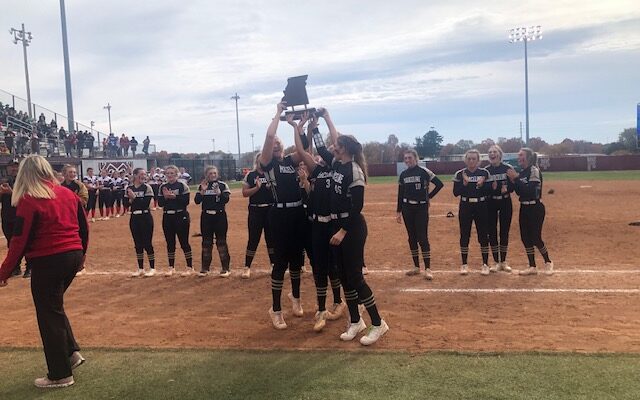 In a rematch of last year’s state title game, the Marceline Lady Tigers got the better of the Sherwood Lady Marksmen again.
Austin Ward with the call on 99.9 The Captain and centralmoinfo.com. The Lady Tigers used another come-from-behind effort to notch the 3-2 victory. Marceline had runners on second and third with no outs in the first and the bases loaded with one out in the second but couldn’t push a run across either time. Sherwood got the first run on a two-out error in the fourth. Ireland Bloss led off the sixth with a double and Emmy Smithhisler sent her home with two outs.
Sherwood responded with a run on an RBI single by Rebekah Riffle in the bottom half. In the seventh, Lucy Moseley led off with a bunt single; Finley Watson brought her home with a single and advanced to second on the play. Cassi Rodgers sac bunted her to third to set up Emma Cathey…
In the circle, Rodgers struck out seven batters the first time through the order and finished with 10. Coach Todd Lowther…
Rodgers, Smithhisler, Ella Lowe and Addison Huber graduate with three Final Four appearances and two state titles.
After the majority of last year’s team returned, Lowther was asked if he felt pressure to go back-to-back.
Marceline closes the year 27-5 while Sherwood finishes 30-6.
Marceline coach Todd Lowther: