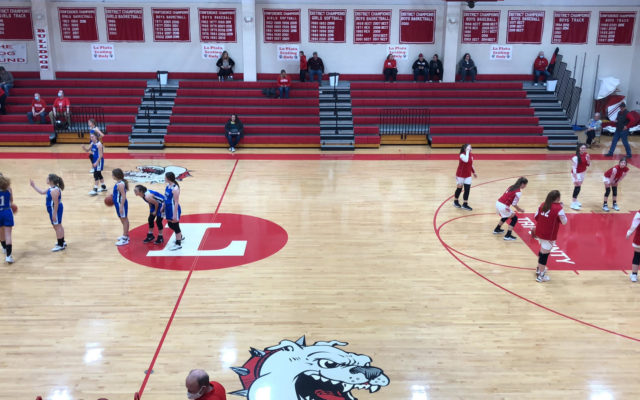 The La Plata Bulldogs and the Atlanta Hornets played to a split in a Tri-County basketball doubleheader Tuesday night at La Plata.

In the girls game, La Plata knocked off 8th ranked Atlanta 56-47. The Bulldogs took a 10-7 lead and held onto the lead the rest of the way thanks to a pair of siblings.

Scott Lunte with the call of Paige’s turnover, and Brooklyn Carvajal’s two on KRES and centralmoinfo.com. The sisters combined for 31 of La Plata’s 56 points. Coach Nathan Simler says this win gives La Plata a lot of confidence moving forward.

The Bulldogs are now 5-3. Atlanta played without their point guard with a majority of the game due to foul trouble. Coach Miranda White learned a lot on what the now 8-2 Lady Hornets can work on moving forward with the loss.

In the boys game, Atlanta snapped a 14-game losing streak to La Plata by beating them 63-52. The Bulldogs held onto a 19-16 lead at the end of the first quarter. The Hornets tightened up the defense and outscored La Plata 18-7 in the second quarter to seize control of the game. Atlanta has now won five in a row. Coach Jason White shares what he’s liked about his teams stretch of play.

Senior Bryce Teter scored a game-high 18 points as the Hornets improve to 7-4. La Plata coach Greg Buescher gave an honest evaluation of where is Bulldogs are now sitting at 3-5 on the season.

You can hear full postgame interviews below: