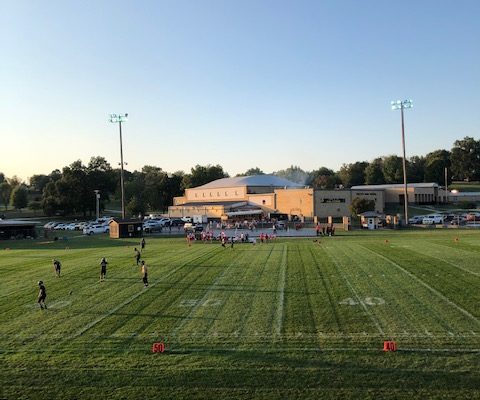 The Fayette Falcons used a bruising ground game and timely passing to defeat Harrisburg on homecoming 42-26. In the first half, Garren Vroman and DJ Moore each ran in a touchdown to give Fayette a 14-6 lead. However, the combo of Tanner Lanes and Austin Darwent kept the Bulldogs in the game in the first half.

J.B. Connoley with the call on Superstation KRES and centralmoinfo.com of Lanes’ first touchdown pass of the night. The two-point conversion failed and Moore would run in his second touchdown to push the Falcons advantage to 22-12 at the half. Moore then got the scoring started in the second half for Fayette.

Fayette quarterback Ben Wells added a touchdown pass to Logan Wiswall and a touchdown run of his own to cap the scoring. Unofficially the Falcons ran the ball 50 times for 346 yards. Vroman accounted for 226 of those yards for Fayette. Harrisburg coach Steve Hopkins said his team will have to raise they physicality level going forward.

Lanes threw for 256 yards and two touchdowns for the Bulldogs as they fall to 6-1 overall and 3-1 in the Lewis & Clark. Fayette improves to 6-1 overall and 4-1 in conference play. You can hear full postgame interviews with both coaches on centralmoinfo.com