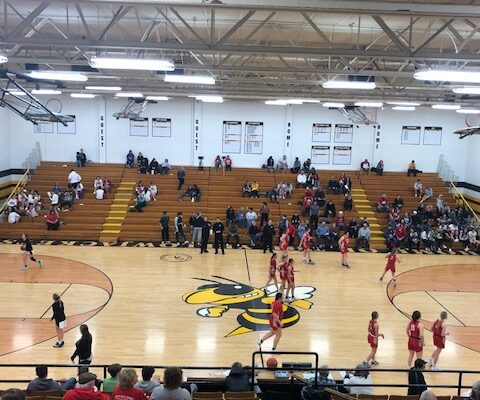 The Fayette girls’ and New Franklin boys’ basketball teams took control early and rolled to opening-round victories on night one of the 92nd Annual Glasgow Tournament Monday night. On the girl’s side, Fayette used a press to jump ahead early against the Lady Bulldogs on their way to a 53-44 win. After outscoring the Lady Bulldogs 10-5 in the opening quarter, the Lady Falcons got out in transition in the second quarter to get some separation.

Colin Schowe with the call on 99.9 The Captain and centralmoinfo.com. Browyn Eubanks led the Lady Falcons with 16 points in the contest. In all eight different Fayette players scored in the contest. Fayette coach Daryl Betts said Eubanks was solid on both ends of the floor.

Fayette improves to 1-0 and will face top-seeded Cairo in Wednesday’s semifinal round. The Lady Falcons led by as many as 17 early in the third quarter, but La Plata battled to keep the game within shouting distance. La Plata coach Nathan Simler said that effort was shown when their leading scorer Clair Coy ran into some early foul trouble.

Coy led all scorers with 18 points. The Lady Bulldogs fall to 0-2 and will face Slater Wednesday in the consolation bracket. In the nightcap, New Franklin used an 11-0 run to open the third quarter to help them cruise past Glasgow 72-51. Clayton Wilmsmeyer led New Franklin with 19 points as seven different Bulldogs landed on the scoresheet. New Franklin coach Jim Schlotzhauer said balanced scoring is becoming a strength of his team.

The Bulldogs have now scored over 70 points in all of three of their games this season. They will face Westran in Wednesday’s semifinal. Glasgow’s Jordan Fuemmeler led the Yellowjackets with 19 points of his own in the contest. Glasgow coach Mick Cropp said this game should serve as a wake-up call for his team.

Glasgow falls to 2-1 and will face La Plata Wednesday in the consolation bracket. Our coverage from the Glasgow Tournament continues tonight with four games beginning with New Franklin and Westran in an opening-round girl’s contest. Coverage begins at 4:20 pm on KRES and centralmoinfo.com. Brandon Monty and Steven Findley Jr. will have the play-by-play.