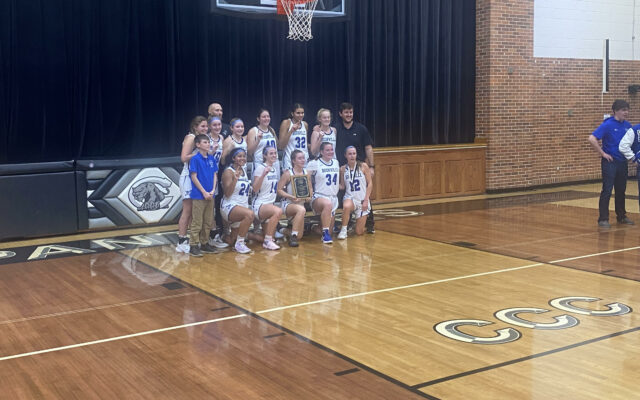 The Boonville Lady Pirates took home the championship crown while Hallsville and Harrisburg also claimed trophies on the final night of the 2021 Centralia Invitational Tournament.

In the championship, Boonville led wire-to-wire for a 58-49 win over Macon. The Lady Pirates led by as many as 16 in the first half but Macon rallied to cut the deficit to 48-44. However, Boonville’s Addison Brownfield insured Macon got no closer.

Colin Schowe with the call on Superstation KRES and centralmoinfo.com. Brownfield finished with a game-high 22 points while Abby Fuemmeler added 17. Boonville coach Jaryt Hunziker said the fast start was critical for his team.

Boonville improves to 5-1 on the season and has now won seven straight games against Macon dating back to 2014. The Tigerettes were led by Shelby Petre who scored 16 of her team-high 18 points in the second. Macon coach Richard Driscoll said both Petre and Chesney Smith provided a needed spark.

Lexi Miller added 13 points as Macon falls to 5-1 on the season. In the third place game, Hallsville overcame an early deficit to defeat Centralia 40-34. Centralia led 16-10 midway through the second quarter before the Lady Indians went on a 9-0 run to end the half. Hallsville kept that run going early in the second half.

Brandon Monty with the call. Hallsville outscored Centralia 12-5 in the third quarter and held off a late fourth quarter push. KRES All-Star Avery Oetting led Hallsville with 12 points while Rachel Hargis added nine points. Head coach Matt Heet was most impressed with the way his role players stepped up offensively.

Hallsville improves to 5-2 with the win and travels to Eugene Monday. Centralia takes on Blair Oaks Tuesday. In the consolation game Harrisburg outlasted Salisbury in a back-and-forth affair 49-46. The game featured several lead changes as the Lady Bulldogs shot 9-13 from the free throw line to close out the game. Carli Ellis was a force in the paint as she scored 18 points and added double-digit rebounds and blocks to complete the triple-double. Harrisburg coach Ryan Richardson said both Ellis and Brecca Thornhill made the impact they needed to make.

Harrisburg improves to 4-1 with the win. Salisbury was led by Micah Guilford with 15 points, while Khloe Wyatt added 13. The Lady Panthers drop to 3-3 on the season.