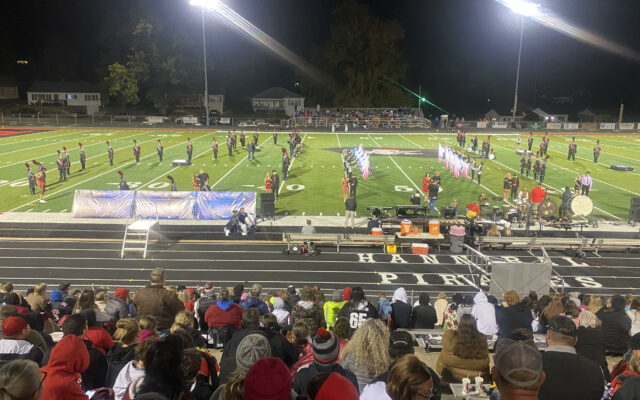 The Hannibal Pirates pulled ahead early en route to a 53-7 win over the Moberly Spartans tonight. Hannibal scored on its first series on a four yard touchdown pass to Kane Wilson. Moberly drove the ball inside the Hannibal 25 on the next possession before a turnover on downs. Hannibal tacked on another score through the air on its next drive…

Brandon Monty with the call on KWIX and centralmoinfo.com. Hannibal led 14-0 after the first quarter before Aneyas Williams took over in the second quarter.

Williams would find the endzone two more times in the quarter and finished the game with 249 total yards and three scores. Quarterback Waylon Anders threw for 232 yards and had three scores in the first half.

Moberly scored on its final drive of the game, capped off by a 1-yard touchdown run by Chris Alexander. Moberly coach Cody McDowell…

McDowell says running backs Hunter Boots and Alexander did a good job of stepping up in the absence of injured starting running back Gage St. Clair.

The loss drops Moberly to 3-4 while Hannibal improves to 5-2. The Spartans return home next week to host conference and district opponent Mexico while Hannibal travels to Marshall. You can find the full postgame interview with Cody McDowell with this story.