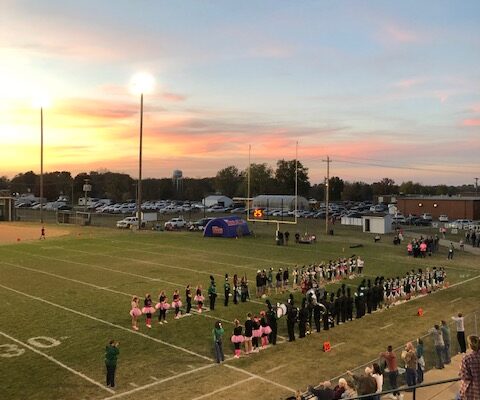 The Westran Hornets dominated on both side of the ball on their way to a 44-0 win over Salisbury on senior night in Huntsville. The Hornets rolled down the field on their opening possession with Nate Kribbs providing the final blow.

Steven Findley Jr. with the call on 99.9 The Captain and centralmoinfo.com of the first of two touchdown runs for Kribbs. He finished the night with 102 yards on 13 carries. Quarterback Cooper Harvey was 9-16 passing for 132 yards with two touchdowns and added a rushing touchdown. Westran coach Aaron O’Laughlin said they put together a complete performance.

The Hornets celebrated the careers of their five seniors before the game. O’Laughlin said this win was a momentum builder for a young team.

Salisbury was held to 99 yards of total offense by Westran’s defense. The Panthers also turned the ball over three times in the game. Salisbury coach Oren Magruder nothing went right in the game.

After starting the season with a record of 3-1, the Panthers dropped four straight conference games to finish the regular season 4-5. Magruder delivered a simple message to his players after the game.

Westran will host Salisbury in a rematch next week to open district play.