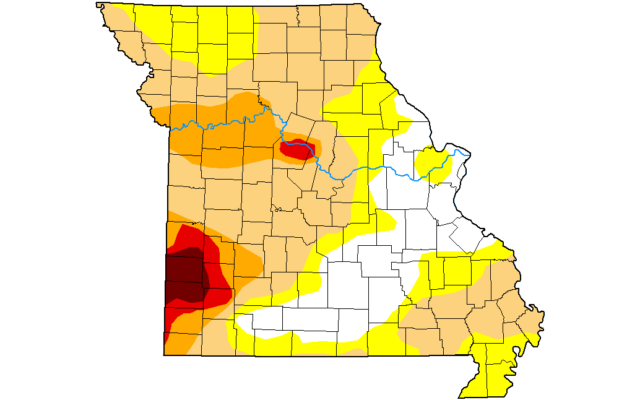 Drought conditions in Missouri as of September 27th, 2022. (The U.S. Drought Monitor is jointly produced by the National Drought Mitigation Center at the University of Nebraska-Lincoln, the United States Department of Agriculture, and the National Oceanic and Atmospheric Administration. Map courtesy of NDMC.)

The continued lack of significant rainfall across much of Missouri has resulted in more than half of the state experiencing drought this week, including the return of exceptional drought.  The weekly US Drought Monitor now has 56.6 percent of Missouri in some stage of drought, including 1.9 percent in the worst level of drought.  It’s the first time in almost four years that exceptional drought has appeared in Missouri, and it’s Barton and Jasper counties bearing the brunt of the historically dry conditions.  Northern Cooper County, along with Rocheport and parts of Howard and Moniteau counties along the Missouri River, have fallen into extreme drought, while severe drought to the west has ballooned further into all or part of 12 counties.

Moderate drought expanded into more of North Central Missouri, with a majority of Chariton, Linn, Livingston, Macon, Randolph and Shelby counties now joining the rest of the region in moderate drought.  So too have Benton, Camden, Cole, Henry, Miller, Morgan, northern Boone, southern Moniteau, and the western halves of Callaway, Maries and Osage counties.  Moderate drought also appeared in 13 southeastern counties and portions of the Arkansas border.  Abnormal dryness has crept east into Lincoln, Montgomery and Pike counties in the northeast, along with Madison, Perry, southern Iron, and eastern Reynolds counties in the southeast.  West St Louis County and a majority of St Charles County have also entered pre-drought condition.

The surge in drought conditions have resulted in just 18.5 percent of Missouri experiencing normal moisture conditions as of Tuesday.