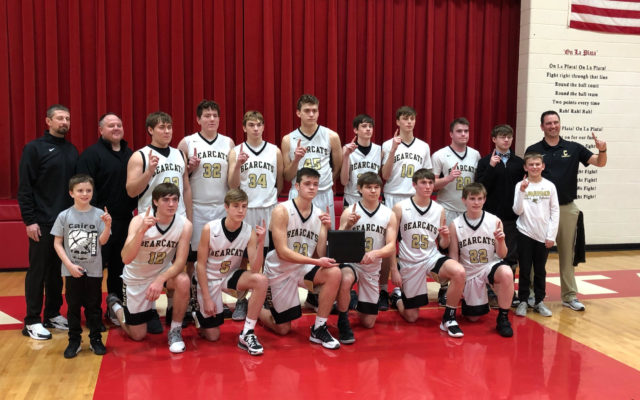 After a seven day delay due to weather, the Cairo Bearcats and Schuyler County Lady Rams claimed the 2021 La Plata Tournament titles.

In the boys championship, Cairo outscored Green City in all four quarters on their way to beating the Gophers 66-51 and claiming their third straight La Plata Tournament title. Gage Wilson got the Bearcats going early in the contest.

Colin Schowe with the call on Glory 97.3 and centralmoinfo.com. Wilson finished with a game-high 25 points. Meanwhile, Bryce Taylor added 17 and Justyn Gittemeier chipped-in with ten off the bench. Cairo coach Nic Zenker said Gittemeier’s contributions were key in the game.

Green City led for a portion of the first quarter, but played catch-up for the rest of the way. Laydon Fields led the Gophers with 18 points, while Aaron Peavler added eleven. Despite the defeat, coach Donnie Fields said he’s taking plenty of positives from the effort.

Schuyler County won its first La Plata tournament title since 1999 with a 52-36 win over Canton. The Lady Rams opened the game on an 11-0 run. Canton answered back in the second quarter with a 19-6 run and held a two point advantage at the half. Schuyler County reclaimed the lead by three in the third quarter, and then held Canton to four, fourth quarter points. Lady Rams coach Thomas Kirkland credited an overtime loss Thursday to Scotland County to helping fuel themselves to their first tournament title since 2017.

Schuyler County is coming off their third straight day of playing a game after they defeated Salisbury Friday night. Canton took to the floor for the first time since last Wednesday’s La Plata Tournament semifinal win over Cairo. Lady Tigers coach Danielle Baker acknowledged there was some rust.