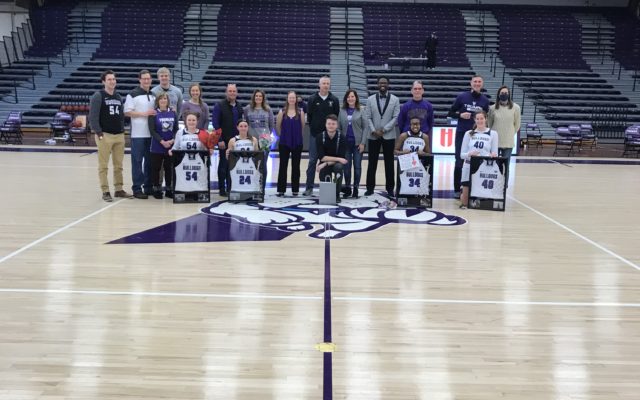 The Truman women got back on track with a big fourth quarter, while the men notched their 7th straight win in a sweep of the Lewis Flyers today (Sat.) at Pershing Arena.

In their senior day game, the Truman women rallied from seven down late in the third quarter to beat Lewis 83-74. Trailing 74-70 with just over four minutes left, the Bulldogs scored eight in a row capped by Belanger…..

Brad Boyer with the call on Superstation KRES and centralmoinfo.com. All five Bulldog starters scored in double figures led by Belanger with 22. Katey Klucking had 18, Ellie Weltha had 14 points and a career-high 16 rebounds. Theo Dean’s team outscored the Flyers 25-11 in the 4th quarter…..

Seniors, Tiffany Davenport scored 10 and dished out nine assists and Katie Jaseckas scored 11 and moved into the Truman career top 10 scoring list with 1,196 points. The Bulldogs improve to 12-3 and will host Quincy in a makeup game on Tuesday. We will have the broadcast on KRES starting at 4:15. The Lewis women got 21 from Grace Hilber, but she was held scoreless in the 4th quarter run. The Flyers drop to 9-6.

In the men’s game, Cade McKnight paced four Bulldogs in double figures with 18 points in a 73-66 victory over Lewis. Leading by just two in the second half, McKnight was part of an 8-0 run that gave Truman’s its first double digit lead….

Hunter Strait came off the bench to score 15 points, Dylan Peeters tallied 14, and Elijah Hazekamp added 11. Coach Jeff Horner was glad to win on less than their best day….

Horner’s 7th ranked Bulldogs improve to 12-1 and have won 17-of-18 going back to last year. Their next game will be Thursday at Illinois-Springfield with the women. The Flyers fall to 7-8.