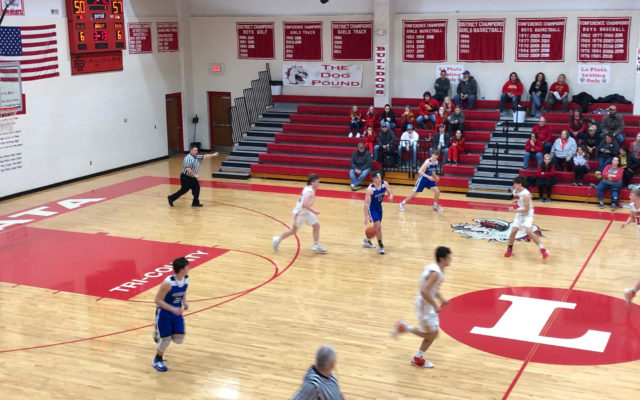 The North Shelby girls, Canton boys, and Atlanta teams picked up La Plata tournament trophies Saturday, but no champions were crowned as snow postponed the two title games to next Saturday.

The boys’ third place game saw the Atlanta Hornets race out to an early lead on their way to a wire-to-wire 76-68 win over North Shelby. The game featured an up-tempo play for the full 32 minutes of regulation play. Atlanta boys coach Jason White said he liked the way his team matched the tempo of North Shelby.

Atlanta improves to 12-7 on the season while North Shelby drops to 10-8.

In the girls’ third place game, North Shelby defeated Cairo 52-33. Both teams had quarters where they scored less than three points, but it was a 23 point fourth quarter by the Lady Raiders which helped them pull away. Daniel said the defense played well.

Cairo sophomore Gracie Brumley had a team-high 10 points. The Lady Raiders improve to 14-4, while Cairo falls to 7-13.

The boys’ consolation game saw Canton race out to an early lead on their way to a 74-53 win over La Plata. After falling behind by as many as 14 points in the first quarter, La Plata cut the deficit to 36-31 at halftime. However, Canton’s Dalton Berhorst came out shooting hot to start the third quarter.

Colin Schowe with the calls on KTCM 97.3 and centralmoinfo.com. Berhorst scored 14 of his game-high 25 points in the third quarter for the Tigers. Sam Arnold followed with 18 points, Kyle Frazier chipped-in 13, and Garrett Lillard scored eleven for Canton as they improved to 7-12 on the season. Canton boys interim head coach Samantha Powers improved her record to 5-5 while in charge of the Tigers.

Canton finished the game with ten made three-pointers. La Plata falls to 6-10 on the season.

In the girls consolation game, Atlanta collected the win 74-45 over the hosts. After losing the first two meetings to La Plata earlier in the year, Lady Hornet coach Miranda White liked how Atlanta kept pressuring the Bulldogs.