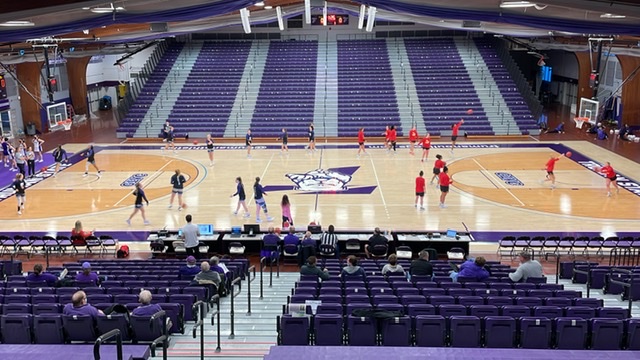 Masen Miller turned what looked like a demoralizing loss for Truman to a 72-71 overtime win over Missouri-St. Louis on this miracle shot at Pershing Arena Thursday night…..

Brad Boyer with the call on Superstation KRES and centralmoinfo.com. The Miller miracle came just moments after the Tritons appeared to have victory. Yaakema Rose tied the game at 69 with 3.3 seconds left on a long three-pointer. On the inbounds pass, Jose Grubbs intercepted and sprinted to the basket for a lay-in and a 71-69 lead with point-one on the clock. After a video review, the clock was re-set to point-six giving Truman a chance at a shot. Miller’s rainbow from the midcourt stripe swished through the net. Coach Jeff Horner’s team came from 13 down in the first half to get the hard fought conference-opening win…..

The 20th ranked Bulldogs went 18-of-19 from the free throw line in winning their conference opener. Cade McKnight led Truman with 24 points and Elijah Hazekamp had 16 points and 14 rebounds. Grubbs scored 23 for UMSL. Both teams are now 5-2.

In the women’s game, UMSL’s pair of all-conference forwards Kiara Stewart and Alex LaPorta combined for 41 points in a 57-54 victory over Truman. The Tritons used an 18-7 second quarter to lead by six at halftime and by as many as nine early in the third. The Bulldogs came back to take their only lead of the second half….

Hannah Belanger led Truman with 21 points and her five three-pointers moved her into fourth place on the Truman career list for threes made with 155. The Bulldogs drop to 3-5. The UMSL women won their second road conference game of the week and improved to 5-1 on the season.

The Truman teams will host Maryville on Saturday. You can hear the games on KRES starting at 12:45.