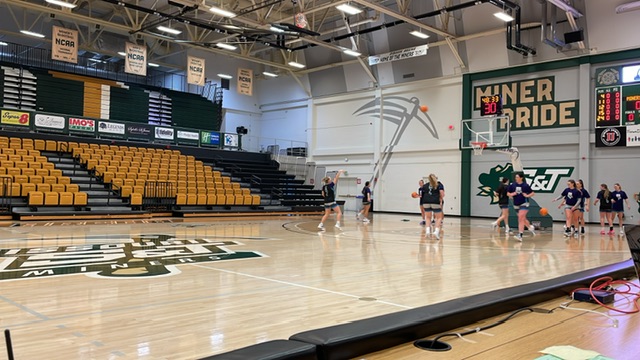 Belanger scored 32 in an 86-63 victory. Truman only led 39-36 at halftime. The GLVC’s leading scorer got the Bulldogs off to a quick start in the second half….

Brad Boyer with the call on Superstation KRES and centralmoinfo.com. Truman scored the first eight points of both the third and fourth quarters and had a 47-27 advantage in the second half. Coach Theo Dean said Belanger got help in her big night….

Ellie Weltha scored 16. Truman won their 5th straight to improve to 13-5. At 9-1, the Bulldogs stay a game behind first place Drury and will play the 3rd ranked Panthers in Springfield on Saturday. The S&T women drop to 6-4 in the conference and 10-8 overall.

The Truman men started the second half on an 18-5 run and held off the Miners for an 89-80 victory. The Bulldogs went from down five late in the first half to up 61-49 with 12 minutes left.

The ‘Dogs kept the lead by hitting 22-27 free throws. Hunter Strait led the team with 24 points. Truman coach Jeff Horner said he did more than score….

The conference’s second leading scorer Julian Smith was limited to 12. The Miners lost for the first time at home and drop to 11-7 and 5-5 in the GLVC. The Bulldogs improve to 8-10 and 3-7 in the league.

You can hear Truman’s doubleheader with Drury in Springfield Saturday afternoon starting at 12:45 on Superstation KRES and centralmoinfo.com.