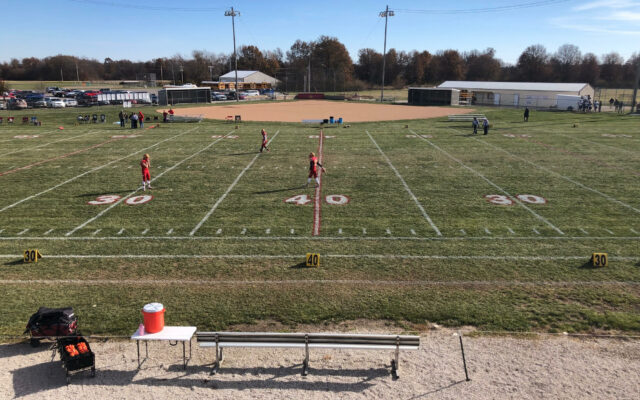 Worth County punched its ticket to the Eight-Man Football Show-Me-Bowl with a 36-34 victory over North Shelby Friday afternoon. The Raiders erased a 30-14 deficit at the half to only trail by two points with 10 minutes to go in the fourth. Four minutes later, the Tigers scored on a three yard touchdown pass from Ayden Gladstone to Alex Rinehart to take a 36-28 lead. North Shelby punched back on the next offensive play.

Scott Lunte with the call of the pass on Glory 97 and centralmoinfo.com. Worth County then found a stand.

The Raiders on the ensuing drive turned the ball over on downs, then Worth County ran the ball to run the clock out, and clinch their 11th state title appearance in program history. Raiders coach David Stuckey said a couple of small plays were the difference.

North Shelby struck first with a four-yard touchdown run by Justin Lunsford. The two schools traded scores before Worth County got 39, and 40-yard touchdown bursts by Rinehart and Gladstone respectively. Gladstone then tossed a 24-yard pass to Jackson Runde to add to the Tiger lead. Stuckey was proud of North Shelby’s resilience.

The rally started late in the third quarter with a 24-yard run by Lunsford, then a 65-yard score from Cale Stoneburner to Carson Orr. The senior wide receiver had the one completion, rushed for 29 yards, and passed for 51 yards. North Shelby’s 2022 class finish 35-11 with three district title appearances, and the program’s first state semifinal appearance since 1995. Stuckey reflected on his seniors.

13-0 Worth County heads to Faurot Field to play for their eighth state title against Drexel next Thursday at 7pm. The Raiders season finishes at 12-1. You can hear Stuckey’s full postgame interview below: