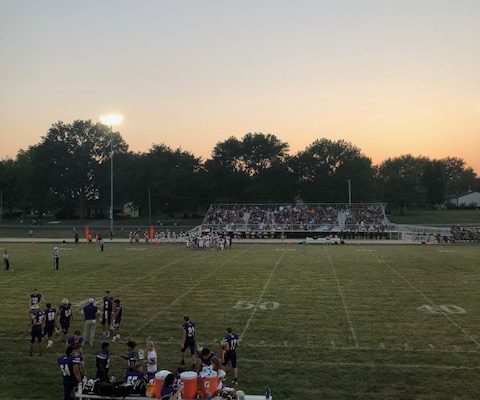 The Westran Hornets used strong performances from their offensive line and their running game to roll past Salisbury 45-12 Friday night. The Hornets recovered an attempted onside kick to open the game and proceeded to score three plays later.

Colin Schowe with the call on KTCM 97.3 and centralmoinfo.com. Massey would add a seven-yard touchdown run and quarterback Derrick Merritt would score on runs from two and eight yards out to up Westran’s lead to 26-0. The Hornets would then strike through the air to end the first half.

The Hornets racked up 323 yards on the ground on 40 carries. Massey led the way with 159 yards on 18 carries. Westran coach Aaron O’Laughlin said the offensive line was a big factor on the night.

Westran capped their scoring on a 60-yard interception runback by Merritt and a 45-yard touchdown run by Garrett Adler. Salisbury would get on the board in the fourth quarter courtesy of long touchdown passes by Grant Biere to Daniel White and Jake Sellers to Nick Carrigan. The Sellers touchdown pass came on the final play of the game. Salisbury coach Oren Magruder said that play was a nice moment to conclude the game.

Biere and Sellers combined to throw for 245 yards, however, the running game only gained 17 yards on the night. Magruder said they will need to improve upfront in order to be successful going forward.

Westran will hold their home opener next week against South Shelby in a game that will be broadcasted on KTCM 97.3. Meanwhile, Salisbury continues Lewis & Clark Conference action when they visit Paris. You can hear our full postgame interviews with both coaches online at centralmoinfo.com.