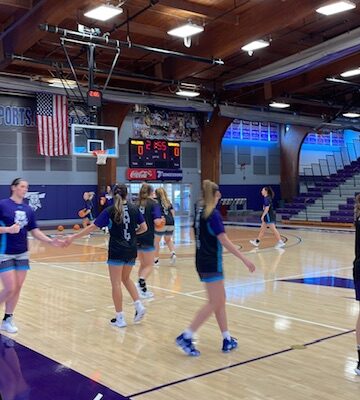 The Truman basketball teams split with McKendree to start GLVC play at Pershing Arena this afternoon (Sat.). In the women’s game, Ellie Weltha matched a career-high with 29 points to lead the Bulldogs to a 79-72 victory…..

Brad Boyer with the call on Superstation KRES and centralmoinfo.com. That hoop was part of a 21-11 second quarter that pushed Truman’s halftime advantage to 16. Bulldog coach Theo Dean liked Weltha’s matchup inside…..

The McKendree men beat Truman for the first time at Pershing Arena 73-68. The game was tied at half and the Bearcats quickly jumped out to their largest lead of nine. Freshman guard Xavier Hall helped the Bulldogs rally back and take the lead…..

An Elijah Hazekamp three-pointer tied the game at 59. McKendree led the rest of the way. Truman coach Jeff Horner said there were too many defensive breakdowns…..

Hazekamp hit six triples and scored 23 points and grabbed 11 rebounds. The Bulldogs drop their third in a row to fall to 3-4.

The Truman teams host Indianapolis on Monday night. You can hear the games on KRES starting at 5:00.