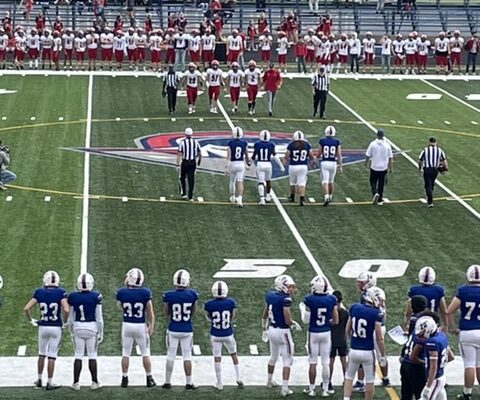 Derieus Wallace scored with 1:51 left and Micah Land hit the extra point to lift Moberly past Southern Boone 21-20 tonight (Fri.) at Dr. Larry K. Noel-Spartan Stadium. In a game with some big individual numbers, Collin Huffman’s quarterback sneak was the only score of the first half to give Moberly a 7-0 lead at half. Southern Boone freshman Brady Dapkus started the second half with a 96-yard kickoff return and an A.J. Evans to Chase Morris 14-yard touchdown pass gave the Eagles their first lead at 14-7. Wallace scored his first touchdown on a three-yard run to tie the score at 14 after three.

Southern Boone used a trick play to take the lead with 4:30 left…..

And Dapkus caught it for a 54-yard touchdown. Brad Boyer with the call on KWIX and centralmoinfo.com. A low snap led to the extra point being blocked, which left the Eagles only up six. On their winning drive, the Spartans faced 4th and 2 at the Southern Boone 27….

An intentional grounding call on the Eagles last drive put them in a big hole and a desperation pass was picked off to end the game. Unofficially, Wallace finished with 218 yards of total offense, with eight catches for 173 yards, and four carries for 45 yards and two scores. Moberly coach Cody McDowell said he was the best player on the field….

Five different times the Spartans stopped Southern Boone on fourth down in plus territory….

Huffman threw for 228 yards and Gage St. Clair ran for 129 yards. For the Eagles, quarterback A.J. Evans threw for 264 yards and Morris caught 11 balls for 117 yards. Southern Boone wraps up the season with a record of 5-6. Moberly improves to 5-5 and will host Boonville for the district championship next Friday night. The Pirates beat Mexico 27-13.