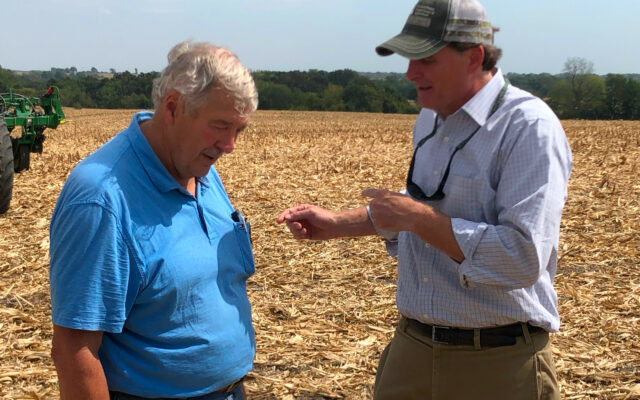 USDA Undersecretary for Farm Production and Conservation Robert Bonnie (right) visits with Neal Bredehoeft at the end of a tour of Bredehoeft's farm outside Concordia, Mo. on Sept. 21st, 2022. Bonnie highlighted cover crop usage, including the Farmers For Soil Health program, during his visit to Missouri.

USDA’s undersecretary for Farm Production and Conservation paid a visit to a farm outside Concordia to promote the recent announcement of 70 projects dubbed “climate-smart” that will soon receive funds from USDA.  Cover crops were the focus of Undersecretary Robert Bonnie’s visit to Bredehoeft Farms, where Bonnie touted the Farmers For Soil Health partnership, which will receive $95 million to increase cover crop acreage.  Bonnie says while the projects are aimed at promoting climate health, he’s not calling them conservation programs.

Bonnie says funds for the 70 programs, totaling up to $2.8 billion, will come from the Commodity Credit Corporation.

USDA Undersecretary for Farm Production and Conservation Robert Bonnie adds that the department will announce a second round of projects geared toward smaller operations later this fall.

Farmers For Soil Health is a partnership between the National Corn Growers Association, National Pork Board, and United Soybean Board, with support from the National Fish and Wildlife Foundation, the Soil Health Institute, the University of Missouri, Walton Family Foundation, DTN, and other partners.