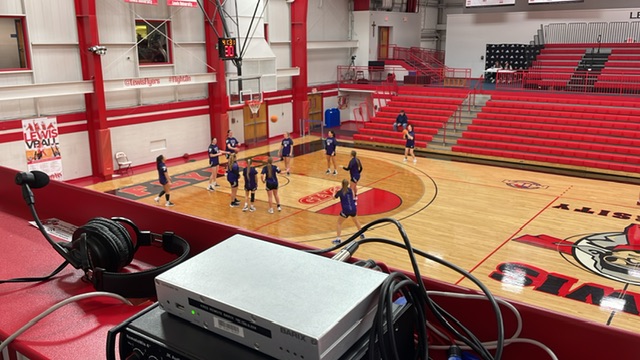 The Truman women erased a 13-point deficit heading into the fourth quarter to beat Lewis 71-65 in Romeoville, Illinois, Thursday night….

Brad Boyer with the call on Superstation KRES and centralmoinfo.com. The Bulldogs scored the first 18 points of the fourth quarter,,…..

Truman held Lewis without a fourth quarter field goal until there were three seconds left. Coach Theo Dean reacted to the stunning comeback….

Ellie Weltha had another double-double with 18 points and 13 rebounds and moved into 6th place on the Truman career rebounds list. Hannah Belanger had 14 and Gracie Stugart added 12. It was the fourth straight win for the Bulldogs, who improved to 3-0 in the GLVC and 6-3 overall. The Flyers drop to 2-1 in the league and 2-5 overall.

The Lewis men led the entire game in a 68-60 victory over Truman. The Bulldogs got an 11 point halftime margin down to one, at 42-41, but could not overtake the Flyers. Hunter Strait led all scorers with 21 points. Coach Jeff Horner said he is providing leadership during a tough stretch….

Strait played in his 122nd career game, which ties Cory Myers for the most all-time in Truman history. It was the 5th straight loss for Truman, now 3-6 and 0-3 in the GLVC. Lewis improves to 4-3 and 1-2 in the conference.

Both Truman teams will play at Illinois-Springfield on Saturday. Those games can be heard on KWIX and centralmoinfo.com starting at 12:45