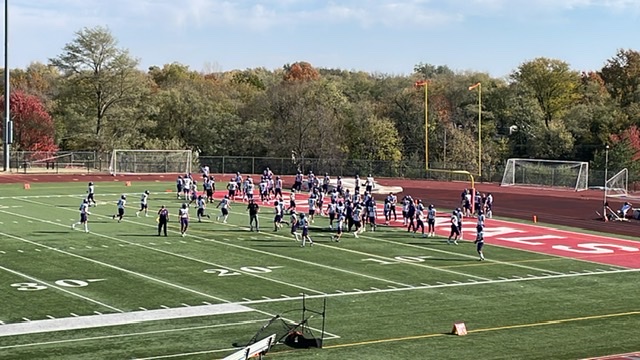 The Truman quarterback tandem of Nolan Hair passed for two touchdowns and Collin Sutton ran for two scores to help lead the Bulldogs to their sixth straight win 42-7 at William Jewell Saturday afternoon in Liberty. With a strong wind at their back, the Bulldogs scored 21 first quarter points….

Brad Boyer with the call on Superstation KRES and centralmoinfo.com. A Cardinals punt in the wind let the Bulldogs start in plus territory at the 42 and Sutton capped a seven-play drive with an eight-yard touchdown run. The ‘Dogs started their third possession at their own 48 and Hannibal’s Shamar (suh-MAR) Griffith scored on the second play….

Blair Oaks graduate Jake Closser scored on a 48-yard pick-six to make it 28-nothing. Ben Thomas’ 64-yard punt return set up an 11-yard touchdown pass from Hair to Matt Hall of Columbia to make the halftime score 35-0. Coach Gregg Nesbitt said his defense and the wind set up the offense in that first quarter….

After several close games, Nesbitt was glad for a comfortable lead to turn loose his bench….

Griffith rushed for 110 yards, which was his first 100-yard rushing day as a Bulldog. Hair’s two TD passes gave him 40 for his career and moved him into 6th place on Truman’s all-time list. Thomas registered his 10th career interception, which moved him into the top 10 on the school’s career list.

The six-game winning streak matches the longest in Nesbitt’s 13 years as head coach. The 6-1 Bulldogs move to 3-0 in the GLVC and will play at Quincy next Saturday. You can hear the game on KRES starting at 12:15.