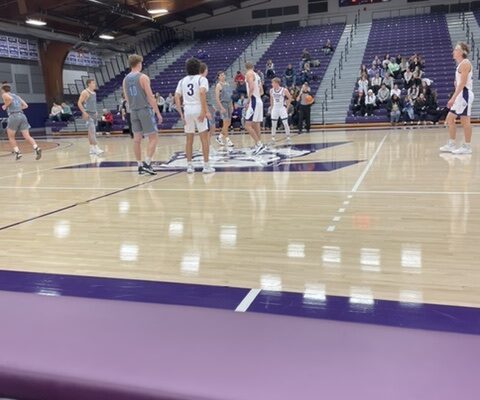 Truman outscored Upper Iowa by 19 points in the second half to blow past the 22nd ranked Peacocks 91-78 at Pershing Arena on Wednesday night. The Bulldogs trailed by as many as 16 points midway through the first half, but knocked that margin down to six at the break thanks to a trio of three-pointers from Clark County shooter Brandon Kracht. Coach Jeff Horner said the John Wood transfer provided a big lift off the bench….

Kracht finished with 15. Elijah Hazekamp recorded his third double-double in as many games with 23 points and 13 rebounds and gave the Bulldogs their first lead of the second half…..

Upper Iowa tied the game at 57, then Truman rattled off the next nine points and never looked back. Hunter Strait scored 19 points and dished out seven assists. The Bulldogs improve to 2-1 and will play at Southwest Minnesota State on Saturday, followed by a game at top ranked Northwest Missouri State on Sunday. We will have that game on KRES starting at 2:45.

The Peacocks were led by Jake Hilmer with 26 points and drop to 1-2.

The Truman women lost at Missouri Western 81-72 on Wednesday night. Hannah Belanger continue her hot start to the season with 25 points. The 1-2 Bulldogs will play at Upper Iowa on Saturday afternoon.