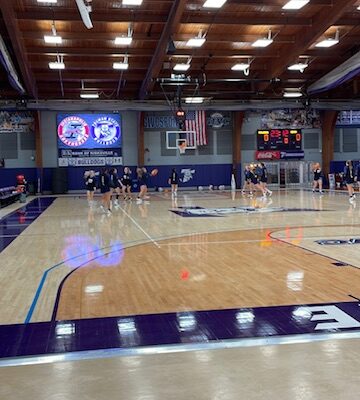 The Truman basketball teams split with Indianapolis in a doubleheader at Pershing Arena on Monday night.

The Bulldog women outscored UIndy by 12 points in the fourth quarter to pull away for an 86-75 victory. Trailing 70-66 with just under seven minutes left, Truman went on a 14-point run…..

Brad Boyer with the call on Superstation KRES and centralmoinfo.com. Ellie Weltha also had a key three-pointer as part of her big second half….

Weltha scored 16 of her 18 points in the second half and the GLVC Player of the Week grabbed 16 rebounds to move into 7th place on Truman’s career list for rebounds. Hannah Belanger led the Bulldogs with 21. Coach Theo Dean said a defensive adjustment helped swing the momentum….

UIndy’s three-game winning streak ended and the Greyhounds fall to 3-3 and 1-1 in the GLVC. The Bulldog women won their third in a row to improve to 5-3 and 2-0 in the conference.

The Greyhounds then went on a 22-6 run. Truman coach Jeff Horner said the difference was toughness….

C.E. Talton of Monroe City had his season-high with eight points and six rebounds. The Bulldogs drop to 3-5 and 0-2 in the GLVC. UIndy moves to 5-1 and 1-1 in the league.

The Truman teams will head to the Chicago suburbs to play at Lewis on Thursday night. You can hear the games on KRES starting at 5:15.