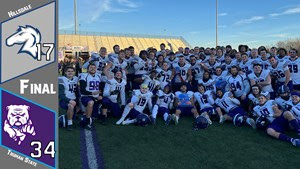 Truman State has repeated as America’s Crossroads Bowl Champions. Cody Schrader capped his monster sophomore season with 219 yards rushing and three touchdowns to lead the Bulldogs to a 34-17 victory over Hillsdale, Michigan this afternoon (Sat.) in Hobart, Indiana. It was 6-3 Truman at halftime and the Chargers hit on a 56 yard touchdown pass to take their only lead two minutes into the third. From there, it was all Schrader, who scored on runs of one, 23, and 44 yards. Coach Gregg Nesbitt….

Schrader is the second Bulldog to rush for 2,000 yards in a season finishing with 2,074. He ends up 66 yards behind Jarrett Anderson.

After Schrader’s one-yard run gave the Bulldogs the lead back, freshman Jake Closser of Blair Oaks picked off a pass. His high school teammate, Nolan Hair, turned that into points when he hit Matt Hall of Columbia on a three-yard scoring pass to make it a two-score game. Schrader then scored on a pair of fourth quarter runs sandwiched around an 88 yard fumble recovery score for Hillsdale. He finished the second with 25 rushing touchdowns, which is two off the program record. Schrader was named the game’s Offensive MVP. Ben Watson, who had an interception and six tackles, was named the Defensive MVP.

Truman wraps up the season with a record of 9-3. Nesbitt’s Bulldogs become the 8th team in program history to reach nine victories….

Nesbitt and the Bulldogs won a record 10 games in winning the first America’s Crossroads Bowl in 2019.