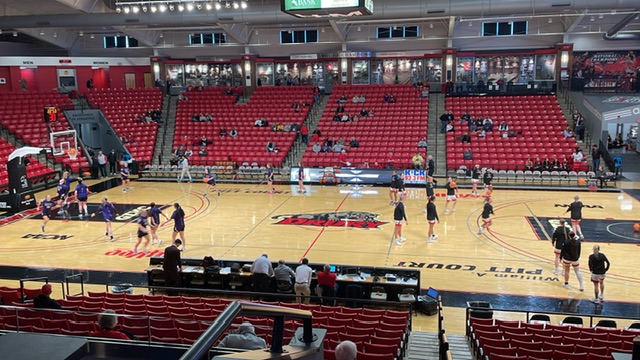 The Truman men rallied and the Drury women pulled away in the second half, in a split in Springfield today (Sat.).

The Bulldog men came from 10 down in the second half to beat Drury 79-63. Elijah Hazekamp scored a career-high 27 points including this bucket as part of a 10-2 spurt to take the lead for good….

Brad Boyer with the call on Superstation KRES and centralmoinfo.com. Truman outscored the Panthers 52-29 in the second half. Coach Jeff Horner talked about the turnaround…..

Dylan Peeters scored 15, Hunter Strait had 13, and CE Talton added nine. The Bulldogs have won three straight to improve to 9-10 and 4-7 in the GLVC. The Panthers drop to 3-8 in the conference and 7-12 overall.

The 3rd ranked Drury women dominated the second and third quarters by 19 points and beat Truman 80-63. The Bulldogs built a 30-21 lead in the second quarter thanks to Ellie Weltha scoring seven in a row….

Weltha scored 16. That was the last field goal of the first half for Truman with 6:12 left. The Panthers finished the first half on a 15-2 run. Bulldog coach Theo Dean described what changed…..

Hannah Belanger led all scorers with 18. The Bulldogs had their five-game winning streak stopped. Truman is now 13-6 and 9-2 in the league.The Panthers won their 14th straight game to improve to 18-1 and 11-0 in the GLVC.

Both Truman teams return home to play Maryville on Thursday. You can hear the games on KRES starting at 5:00.