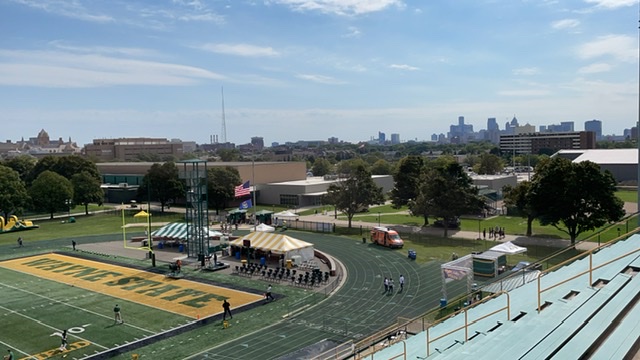 The Truman Bulldogs took advantage of great field position to score touchdowns on their first two possessions and led the entire way in a 27-9 victory over Wayne State in Detroit Saturday afternoon. The ‘Dogs defense forced three-and-outs and punts into a stiff breeze to set up the offense at the Warriors 44 and 40 yard lines. Cody Schrader capped the first drive with an eight-yard run and tight end Jake Ellis set a milestone to cap the second possession….

Brad Boyer with the call on Superstation KRES and centralmoinfo.com. Wayne State scored their only first half points after an interception return set up a short field goal with 2:43 left. Truman took the momentum right back on a 45-yard touchdown pass from Nolan Hair to freshman Tate Crane for his first collegiate TD to make the score 20-3 at halftime. Here’s how the second half started…

A couple second half highlights punctuated a strong effort by the Truman defense. The Bulldogs stopped Wayne State on back-to-back plays from the half yard line to keep the lead 18. Peyton Carr of Rock Bridge High School was credited with the 4th down tackle. The last Warriors possession ended with Quincy Notre Dame freshman Jack Marth forcing a fumble on a sack that was recovered by former Westran standout Ben Miller. Isaiah Estes of Fayette had six tackles. Nesbitt commented on that unit…

Nesbitt moved past Don Faurot for second place on the Truman wins list with 64. After sweeping two games in Michigan, the Bulldogs come home to host a Michigan team in Hillsdale next Saturday. You can hear the game on KRES starting at 11:15.