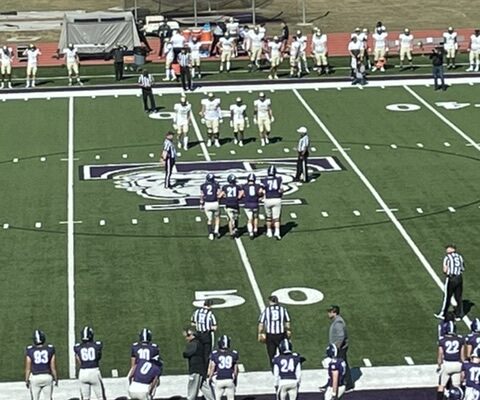 Truman took advantage of two early mistakes by Missouri S&T as part of a 17 point first quarter and cruised to a 36-14 homecoming win today (Sat.) at Stokes Stadium. After the Miners went three-and-out to start the game, Mason Huskey of Hallsville blocked a punt and the Bulldogs. Three plays later the Bulldogs were in the endzone….

Brad Boyer with the call on Superstation KRES and centralmoinfo.com. Isaiah Estes of Fayette then picked off a pass that resulted in a Grant Ross 40-yard field goal. Before the end of the first, the Bulldogs put together a 10-play, 79-yard drive capped by Collin Sutton’s first career touchdown pass to Tanner Lain….

Lain would also have a blocked punt in the second half that led to a field goal. The backbreaker came late in the first half. Leading 23-8, the Bulldogs faced a 4th and 13th from the Miners 37 with 13 seconds left and no timeouts….

That made the score 30-8 at halftime. Truman cruised through the second half which wasn’t necessarily good according to head coach Gregg Nesbitt….

It was the GLVC-opener and fourth straight win for the Bulldogs, after a season-opening loss. The Miners drop to 2-4 and 1-1 in the league. Truman will host Southwest Baptist next Saturday night. You can hear the game on KRES starting at 5:15.