Truman Jumps On Hillsdale And Cruises To A 3-0 Start 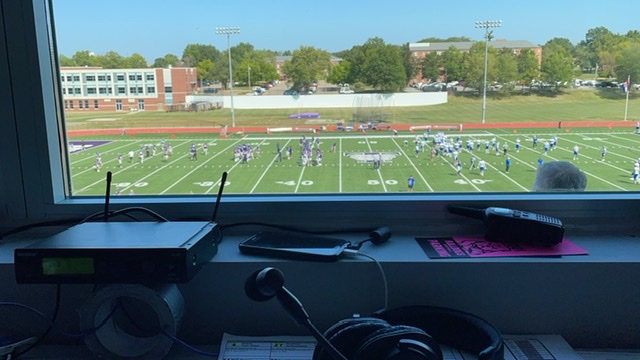 Truman State scored on it’s first four possessions and cruised to a 38-24 victory over Hillsdale, Michigan in the home opener at Stokes Stadium this afternoon (Sat.). Nolan Hair led the Bulldogs on a 9-play, 65-yard opening drive that culminated with a 25-yard touchdown pass to Zach Zerwig. The Chargers answered with a 42-yard field goal to make it 7-3. A Jefferson City to Columbia connection got the Bulldogs right back into the endzone….

Brad Boyer with the call of the Hair to Matt Hall 5-yard touchdown pass on Superstation KRES and centralmoinfo.com. A Hillsdale punt pinned Truman back at their own 12. ‘Dogs running back Cody Schrader turned that into this big play….

That run was just four yards shy of the longest rushing play in Bulldog history and gave Truman a 21-3 lead after one quarter. Schrader finished with 173 yards rushing.

In the second, Josh Scheiderer connected on a 46-yard field goal and Hair hit Dante Ruffin from seven yards out to make it 30-3 at halftime. Jake Tuttle’s first career Bulldog touchdown of seven yards extended the lead to 38-3 with just over four minutes left in the third quarter. That brought in mass substitutions and Hillsdale took advantage narrowing the large margin. ‘Dogs coach Gregg Nesbitt didn’t care that the Chargers made the score closer….

Hair threw for 250 yards and three touchdowns. Fellow Blair Oaks Falcon Ben Thomas had four pass break-ups and tied Ulysses Ross for team-high tackles with seven. Ben Miller of Westran had four stops, including a half tackle for loss. Isaiah Estes of Fayette had six tackles.

The Chargers remain winless, while Truman improves to 3-0. The Bulldogs will travel to nationally ranked Tiffin, Ohio to wrap up non-conference play next Saturday. Superstation KRES is being denied access to the pressbox for any broadcast due to Covid concerns. We will let you know about contingency broadcast plans this week.