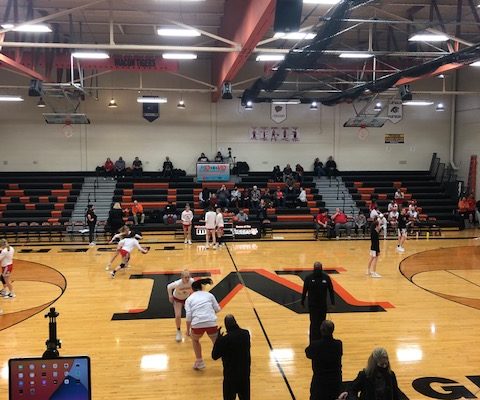 Top-seeded Macon and second seed Mexico advanced to the championship of the 2021 Macon Girls Basketball Tournament with double-digit semifinal victories.

The Mexico Lady Bulldogs dominated the middle quarters on their way to a 63-50 win over Centralia. Mexico and Centralia were in a back-and-forth tussle for much of the first half. However, with the Lady Bulldogs up eight points and time winding down in the second quarter, Mya Miller would shift the momentum completely in Mexico’s favor.

Colin Schowe with the call on Superstation KRES and centralmoinfo.com as Mexico ended up taking a 36-25 lead into halftime. Miller finished with a game-high 26 points while Riley Blevins added 14 and Riley Thurman chipped in twelve in Mexico’s victory. Mexico coach Ed Costley said one of the keys to the victory was denying Centralia the three-point line.

Centralia falls to 9-4 on the season and will play for third place Friday night. Meanwhile, Mexico improves to 10-2 and advances to Saturday night’s championship game against the Macon Tigerettes.

Macon used a 14-0 run from the end of the first quarter through the first couple of minutes of the second to help them dispatch fifth-seeded Harrisburg 57-33. Kate Hawkins led the way for Macon as she scored 22 points for the second straight game. Macon coach Richard Driscoll said Hawkins’ offensive rebounding continues to be a strength for her.

Macon improved to 14-1 and have now won nine straight. Despite trailing 33-16 at halftime, the Lady Bulldogs battled in the third quarter and outscored Macon through much of the frame. Harrisburg coach Ryan Richardson said the third quarter was one of the positives he took from the game.