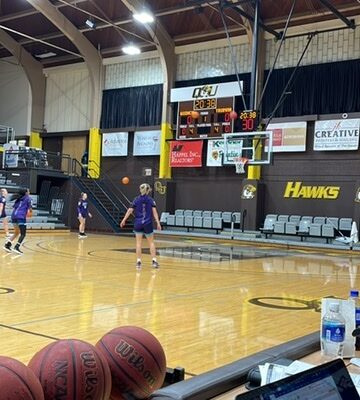 Hunter Strait hit a three-pointer with nine seconds left to complete a Truman comeback in a 73-72 victory at Quincy Tuesday night. The Bulldogs, who were once again playing without All-American Cade McKnight and without Keaton Mitchell, trailed by as many as nine points five different times of the second half including 69-60 with 6:15 left. The Hawks left the door open by scoring just three points the rest of the way, while Strait scored the last five points of the game….

Brad Boyer with the calls on Superstation KRES and centralmoinfo.com. Strait finished with 11. Coach Jeff Horner tried to explain how they were able to steal the road win, while not at full manpower…..

Masen Miller kept the Bulldogs in the game with six three-pointers and 23 points. GLVC Player of the Week, Elijah Hazekamp, chipped in 14. Dylan Peeters had a double-double with 12 points and 10 rebounds and blocked away a Quincy shot attempt with less than a second left. The ‘Dogs sixth win in a row pushes their record to 10-2 and 4-0 in the GLVC. Earlier in the day, Truman moved up three spots in the NABC Division II Top 25 Poll to number 16. Quincy drops to 8-6 and 1-3 in the conference.

In the women’s game, Hannah Belanger pumped in 25 points in Truman’s 68-59 victory over Quincy. Leading by five at the break, Belanger led a third quarter charge that saw the Bulldogs outscore the Hawks 21-13…..

Ellie Weltha had a double-double with 12 points and 12 rebounds. The Bulldogs third straight win pushes their record to 6-5 overall and 2-1 in the GLVC. The Hawks fall to 4-7 and 0-3 in the conference. The Truman teams are right back at it Thursday night against Lewis and Pershing Arena. You can hear the games on KRES starting at 5:00. You can hear postgame interviews with the coaches with this story at centralmoinfo.com.