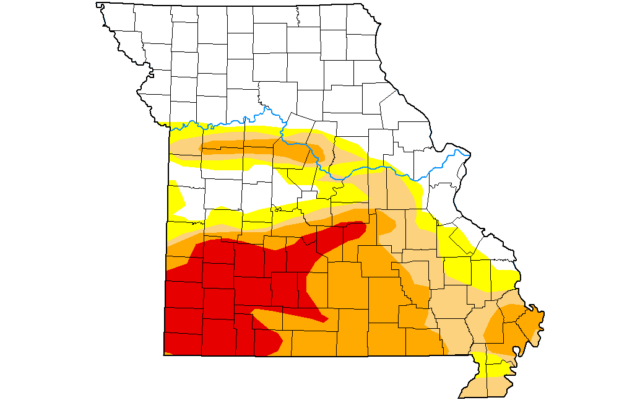 Drought conditions in Missouri as of August 2nd, 2022. (The U.S. Drought Monitor is jointly produced by the National Drought Mitigation Center at the University of Nebraska-Lincoln, the United States Department of Agriculture, and the National Oceanic and Atmospheric Administration. Map courtesy of NDMC.)

Areas of central and eastern Missouri witnessed some improvement in drought conditions over the past week, but extreme drought has found its way northeast along Interstate 44.  The weekly U.S. Drought Monitor update indicates an expansion of extreme drought into northeastern Laclede, southeast Camden, a majority of Pulaski, and northwestern Phelps counties.  However, the percentage of area in this third stage of drought decreased this week to 14.4 percent, as enough rainfall fell along the Arkansas border to upgrade all or part of nine counties in southern Missouri to severe drought.

Those same showers also provided an upgrade to moderate drought for most of Butler and Wayne counties in the Southeast, and allowed central Dunklin, northern Pemiscot, and southwestern New Madrid counties to enter an abnormally dry stage from moderate drought.  Parts of the Mississippi River valley from St Louis south to northern Cape Girardeau County have exited abnormally dry condition, while a small stretch of the Missouri River from Hermann west through southern Callaway, northern Cole and central Moniteau counties are no longer in drought.  More areas of West Central Missouri, including a majority of Benton, Henry and Morgan counties, eastern Bates, northern Miller, and the southern halves of Cass, Johnson and Pettis counties, are no longer abnormally dry.