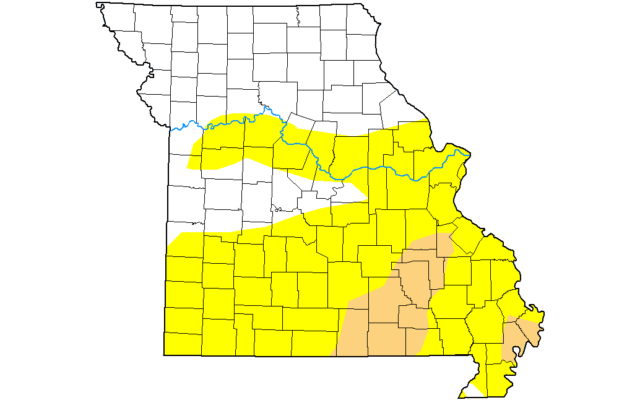 Drought conditions in Missouri as of June 28th, 2022. (The U.S. Drought Monitor is jointly produced by the National Drought Mitigation Center at the University of Nebraska-Lincoln, the United States Department of Agriculture, and the National Oceanic and Atmospheric Administration. Map courtesy of NDMC.)

Another week of dryness has resulted in the southern half of Missouri, along with much of the Missouri River Valley, entering abnormal dryness or moderate drought.  The weekly US Drought Monitor shows 61.2 percent of Missouri is in some stage of dryness, more than double last week’s rate.  Generally, all points south of a line stretching from Clarksdale west to Centralia, Glasgow, Carrollton, and Independence are impacted by these conditions.  However, an area stretching from Bland northwest to Sedalia and Harrisonville, as well as southwest to Lake Ozark and El Dorado Springs, remains outside abnormal dryness.  A sliver of southern Dunklin County is also in normal condition, primarily around Senath and Hornersville.

Among the dryness, 8.8 percent of the state has entered the first stage of drought conditions.  One patch stretches from central Saint François County southwest through Carter, Howell, Iron, Oregon, Reynolds and Shannon counties, as well as western Ripley and southeastern Texas counties.  A second patch covers southern Mississippi, eastern New Madrid, and southernmost Scott counties.  No part of Missouri is presently in severe or worse drought.