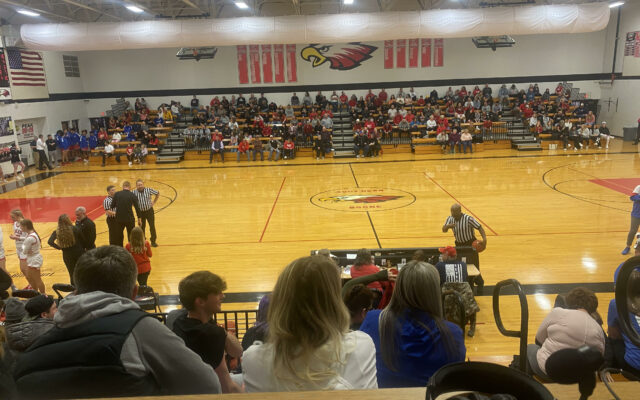 The Southern Boone Lady Eagles erased an early deficit and earned a come from behind win in the fourth quarter over the Moberly Lady Spartans 49-43 Friday.

Moberly led 14-0 after the first quarter. Southern Boone slowly chipped away for the next two quarters and started the fourth quarter with a 9-2 run to take a 35-32 lead with 5:26 to play. Emilee DeHaas fueled the Lady Eagles run with several crucial offensive rebounds and timely baskets.

Brandon Monty with the calls on KRES and centralmoinfo.com. DeHaas scored nine of her 11 points in the fourth as Southern Boone outscored the Lady Spartans 23-13 in the final frame. Lady Eagles head coach Damon Wren says Moberly gave the second ranked Lady Eagles one of their toughest tests of the year so far.

Southern Boone improves to 10-1 with the win, while the loss puts Moberly at 8-4 on the season.

In the boys game, the Spartans led the entirety of the game en route to a 45-31 win. Moberly frequently got to the free throw line and controlled the rebounding category throughout the contest. Spartans head coach Cord Hagedorn was pleased with the intensity his team played with.

Jaisten Payne and Zayne Montgomery each scored in double figures while Martez Nabors and Cael Head combined for over 10 blocks on the defensive side. Hagedorn talked about the upcoming slate of games for Moberly.

Moberly is now 5-6 on the season while Southern Boone falls to 3-7. You can find full postgame interviews with this story at centralmoinfo.com.