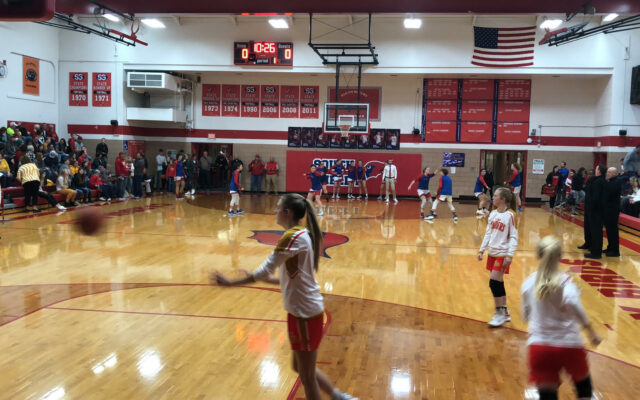 In the boys game, the Cardinals staved off a 14 point North Shelby comeback and won 66-63. The Cardinals scored 43 first half points thanks to strong defense, and transition. The Raiders began the rally at the start of the fourth quarter with some timely threes from junior J.D. Rich, full court presses, and South Shelby turnovers. North Shelby had a chance to tie the game at the end.

Scott Lunte with the call of Kyle Smith’s three-point attempt on Glory 97 and centralmoinfo.com. The Cardinals snap a three game losing streak and improve to 4-5. Coach Dalton Armontrout said this was a needed team win.

Cardinal junior Zaiden Wood tied Rich with a game-high 18 points. Raiders coach Landon Daniel said they were kicking themselves a little bit in the first half.

In the girls game, South Shelby utilized strong rebounding and defense to propel themselves to a 67-37 victory. Coach Luke O’Laughlin’s Ladybirds held the Lady Raiders to 13 first half points.

Junior Ava Williams paced 2-5 North Shelby with a game-high 17 points. Both North Shelby teams face Novinger after the holiday break. The 8-2 Ladybirds next play in the Salisbury tournament where they will be the top seed. You can hear all three coaches postgame interviews below: