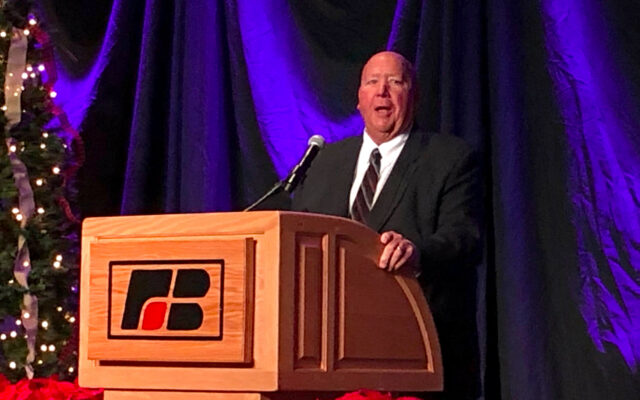 Kelly Smith of Shelby County thanks Missouri Farm Bureau members and employees after receiving the Outstanding Service to Agriculture award. Smith retired earlier this year after working at Farm Bureau for 33 years as the Marketing and Promotions Program director.

Missouri Farm Bureau recognized their former marketing and commodities program director with one of this year’s Outstanding Service to Agriculture awards.  Kelly Smith of Clarence, who retired in April after a 36-year career with Farm Bureau, received the honor during the group’s annual meeting Monday.  He expressed appreciation for everyone he had the opportunity to work with.

Smith said the award wouldn’t have been possible had he not regularly received input from Farm Bureau members.

Kelly Smith was one of three Outstanding Service to Agriculture honorees.  Missouri Farm Bureau also recognized Keith Cramer of Columbia, who also retired from the group in the past year, and Congressman Jason Smith of Salem.