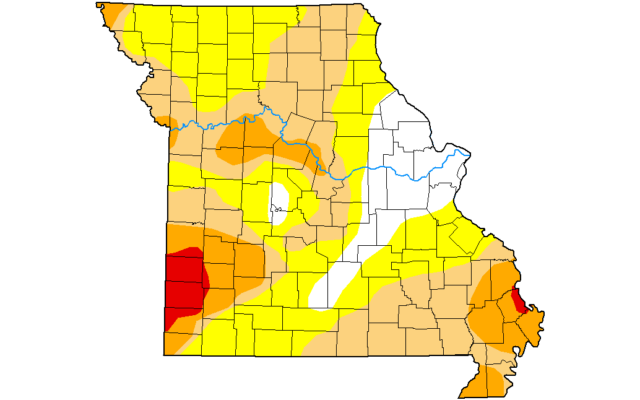 Drought conditions in Missouri as of November 22nd, 2022. (The U.S. Drought Monitor is jointly produced by the National Drought Mitigation Center at the University of Nebraska-Lincoln, the United States Department of Agriculture, and the National Oceanic and Atmospheric Administration. Map courtesy of NDMC.)

Marginal changes appeared in this week’s US Drought Monitor, released just ahead of the Thanksgiving holiday.  The most notable change was the extension of severe drought into northwestern Cole County and more areas of southern Boone County.  Abnormal dryness also returned to the Hannibal area and a majority of Ralls County, along with eastern Crawford and central Washington counties.  Close to 51 percent of Missouri is in some stage of drought, with areas in extreme drought unchanged at 2.8 percent.  Another 36.9 percent of the state is in abnormal dryness.